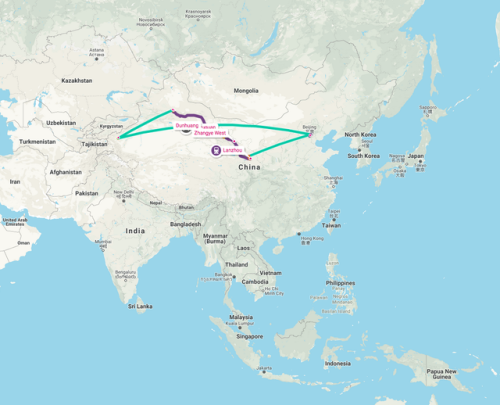 Here’s the map of our trip if you are curious what the trip physically looks like.

And this is the end of our Silk Road plane/train/road trip.

There is so much you can share through pictures and words, but there’s so much more when you are actually there. Seeing it with your own eyes, the pictures you didn’t take, those little furtive glances of daily life, those chitchat which give you little insider knowledge, it’s all about the feelings you get when you are actually in a place. And it’s especially true with trips to certain part of the world. I could talk for hours but not everything can be written because of so many factors involved.

Keep traveling. Experience the world with your family, with your bestie or even by yourself. Your badly taken pictures are worth so much more, because of the feelings and memories it will bring back, than the best photos from a book.

On a side note and to conclude this Silk Road Trip chapter … Elke and I found the limit to our friendship.

I’ll wait outside… then we’ll switch

On our last day in Kashgar, we were going to go see the livestock market before heading to the airport for our mid-afternoon trek back to Beijing.

The day begins with Uyghur farmers and herders trekking into the city from nearby villages. By lunchtime, just about every saleable sheep, camel, horse, cow and donkey within 50km has been squeezed through the bazaar gates. […] Trading at the market is swift and boisterous between the old traders; animals are carefully inspected and haggling is done with finger motions. {LonelyPlanet}

As we were approaching our guide told us that apparently the market was closed for “quarantine/cleaning”. We were not the only ones caught off guard by the look at the number of trucks loaded with animals on the side of the road.

So I didn’t get to take pictures of the animals, just a little video of the side of the road through the car window :-(.

This was quite an interesting mosque to visit.

First time I have to pay to enter a place of worship (all religions included). I usually pay for Museum.

The Hall of Prayer is built on a high platform and it contains three parts: the Inner hall, the Outer hall, and the Hall Entrance, all which sit on a dais over one meter high over ground. The roof of the Outer Hall is supported by 140 light blue wooden pillars. These seven-meter high pillars were laid out on a grid pattern, artistically spaced. On the roof and on the pillars are exquisite carvings and beautiful pictures. The brick gate tower, which faces Id Kah Square, is full of elaborate flower-pattern carvings, mainly in green.

While waiting for the prayer time to end (but no prayers) we went to have tea at a traditional tea house. Just watching those old men going about with their social life was a treat.

It’s is the largest mosque in China. Every Friday, it houses nearly 10,000 worshippers and may accommodate up to 20,000. {“Potential houses”}

The mosque was built by Saqsiz Mirza in ca. 1442 (although it incorporated older structures dating back to 996) and covers 16,800 square meters.

A few more pictures of our day in Kashgar.

The mausoleum is perhaps the finest example of Islamic architecture in Xinjiang. A large dome of 56 ft (17 m) is at the center surrounded by four corner minarets with stripes and arabesque floral patterns. Each of the windows of the minarets are in a different geometric pattern while the tops have turrets with an inverted lotus dome and scalloped edges. The entrance to the mausoleum is a majestic facade and a tiled iwan-niche style typical of Central Asian mosques.

The mazar (mausoleum) was initially built in ca. 1640 as the tomb of Muhammad Yūsuf, a Central Asian Naqshbandi Sufi master who had come to the Altishahr region (present-day southern Xinjiang) in the early 17th century, and possibly was also active in spreading Sufism in China proper. Later, Muhammad Yūsuf’s more famous son and successor, Afāq Khoja, was buried there as well. All told, the beautiful tiled mausoleum contains the tombs of five generations of the Afāqi family, providing resting places for 72 of its members.

In the northern part of the tomb is the lecture hall which is said to be used as classroom to telling the doctrine of Muslims. [Wikipedia]

Another landmark that is recognizable in The Kite Runner… The Hundred Years Old Tea House.

Here’s the map of our trip if you are curious what the trip physical looks like.