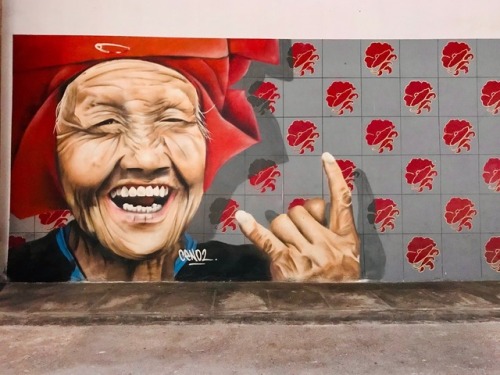 With the start of September, we are back to the “Monday Murals”
Samsui Lady by local artist Muhammad Azlan Ramlan (a.k.a ceno2)

As we went to the Central Business District to have lunch with hubby/daddy we were next to Amoy Hawker Center and this is one of my favorite murals there so decided to restart the series with this one.

This Samsui woman is painted on different murals in the city but this one is the by far the best one.  It brings a smile to my face each time I see it.

The term Samsui women (三水妇女 – sān shuǐ fù nǚ) broadly refers to a group of Chinese immigrants who came to Malaya and Singapore between the 1920s and 1940s in search of construction and industrial jobs. Their hard work contributed to the development of the Straits Settlements, both as colonies and later as the new nations of Singapore and Malaysia. Samsui women did manual labor similar to coolies but were more independent. {…} They had a reputation of rejecting jobs involving drug (particularly opium) peddling, prostitution, or other vices, even if that meant living in poverty. Their contributions to housing construction and as well as labor at hawker centers have been invaluable to Singapore’s early development. Before arriving in Singapore, most Samsui women took vows never to marry, although there have been known exceptions. They lived in cramped conditions with other Samsui women, helping out each other and forming tightly united cliques.

About 90% of them were Cantonese, while the rest were Hakka. In Chinese, these women are referred to as Hong Tou Jin (红头巾 – hóng tóu jīn), which means “red bandana”, because of the red cloth hats they wore at work. (Wikipedia)