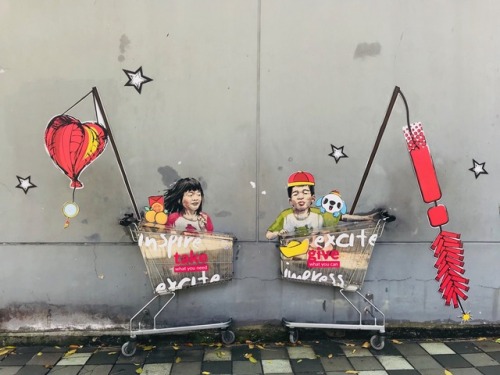 After quite a lot of Monday Murals posts from Yip Yew Chong’s Art, I’m starting a new thread with Ernest Zacharevic. He’s probably the one who started the whole Penang’s street arts frenzy.

Zachareric recognition grew after creating a series of murals in Malaysia featuring scenes depicting everyday Malaysian life using the local people as models for the murals. His work most often features a 3D element as the painted subjects are often interacting with actual objects such as siblings taking a ride on an actual bike or monkeys sitting in an actual wheelbarrow

This is one of signature art from Ernest Zacharevic. Half painting half object which gives it a three-dimensional view.

The base art was all customized for Chinese New Year.